FES, or Functional Electric Stimulation, is a physiotherapy treatment performed using the EquiNew FES device developed by Dr. Sheila Schils. This physiotherapy helps improve and restore normal muscle function and provide pain relief. It can be applied to the neck, back, and pelvis and is very beneficial for reducing inflammation and reversing muscle atrophy. In horses with underlying back problems, FES therapy is especially useful to re-educate the muscle memory, improve range of motion, and reduce scar tissue and adhesion formation. 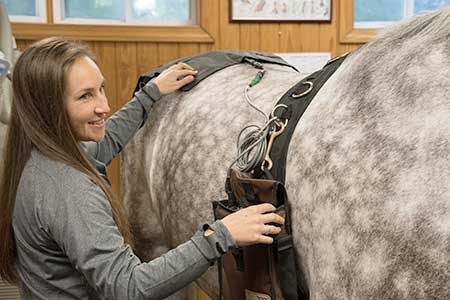 FES Therapy Treatment sessions are performed according to a therapeutic protocol which requires an initial and follow up therapy session within 12-48 hours of each other, with no riding in between. Each therapy session involves the application of the EquiNew device at two sites for 30 minutes at each site. After the initial series, a patient will continue to have FES Therapy Treatment sessions on a periodic basis with a gradually increasing interval between treatments, according to the response to therapy seen. A typical protocol involves a total of 7-8 therapy sessions. Horses should not be ridden for 2 hours following a therapy session, but may be ridden at any time prior to a session, including immediately before.

FES has multiple applications in practice. Because FES produces a functional movement, without the added weight of a rider or the concussive load produced during exercise, FES therapy is especially beneficial to help maintain muscle mass in a horse that is out of work for an unrelated injury, and recondition muscles in advance of a horse’s return to sport. Following completion of a therapeutic protocol, a horse can continue to receive maintenance treatments to promote optimum performance.

A typical FES therapeutic protocol when followed to completion takes three months, and costs approximately $2000. After that time, the patient transitions to a maintenance program of treatment every one or two months, or on an as needed basis for maximum performance. VEI offers a discounted package price for a patient initiating an FES therapeutic protocol, which requires an initial and follow up therapy session in close succession. The package price includes two FES Therapy Treatments and two stable calls.