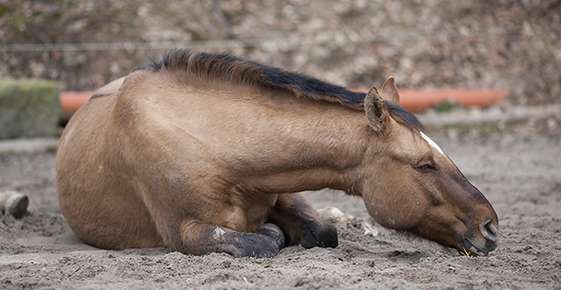 A seizure is caused by a period of abnormal electrical activity in the brain. Seizures tend to come on suddenly and end by themselves. They also sometimes occur again. There are three main types of seizures:

Partial (or focused) seizures affect one part of the brain, which, in turn, leads to symptoms in only one part of the body. This kind of seizure usually lasts only a few seconds. Symptoms include twitching in the limbs or face, running in a circle compulsively or self-harming behavior. A seizure can start out as focused and then become generalized.
Generalized seizures affect a larger area of the brain, which then affects the entire body. These are the most common type of seizure in horses and can last from five to 60 seconds. A horse having a generalized seizure may fall on its side, make twitching movements with its limbs or defecate, urinate or salivate during the seizure.
Status epilepticus is a type of seizure in which several generalized seizures occur rapidly one after the other. These, however, are uncommon in horses.

The most common causes of seizures in foals less than 2 weeks of age include:

In foals less than 1 year of age, the most common causes of seizures include:

Adult horses have a higher threshold for seizures, which means more brain damage must occur before they have a seizure. The most common causes of seizures in horses over 1 year of age include:

Diagnosing a horse with seizures can be difficult because an equine veterinarian is often not present during a seizure. The following may be used to identify the underlying cause:

Medical history, including symptoms, prior illnesses, vaccinations and diet
A physical exam to look for signs such as head injury, infection or fever
A neurologic exam to check mental state, posture and gait
Laboratory tests on blood and urine
Imaging tests, such as X-rays, a CT scan or MRI, to look for signs of head injury

Treatment depends upon the underlying cause of the seizures — ingestion of toxins will be treated differently than a head injury will be. Treatment options for seizures include:

Anticonvulsant medication to reduce seizures, such as diazepam, pentobarbital and phenobarbital
Drugs that help maintain blood flow to the brain and reduce damage to the brain tissues
Corticosteroids (anti-inflammatory drugs) to stabilize the membranes of the brain cells

If your horse has had a seizure, contact us right away. We will examine your horse and suggest suitable treatment options.